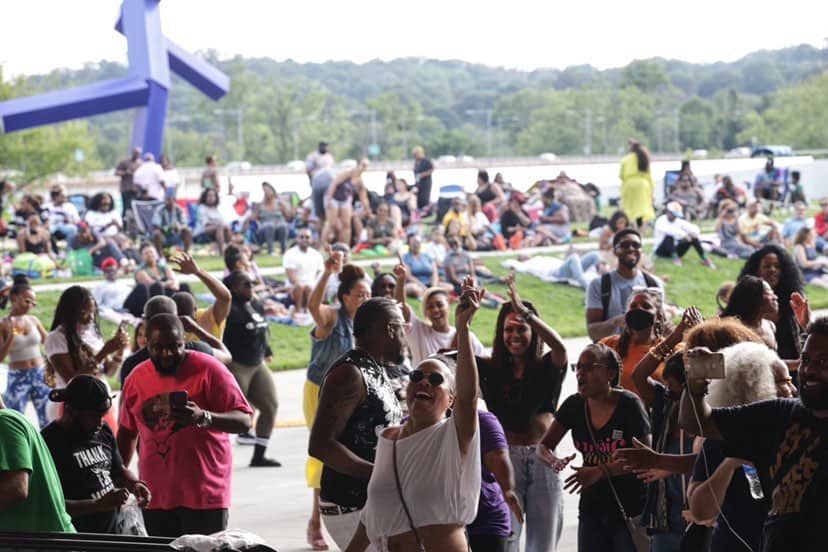 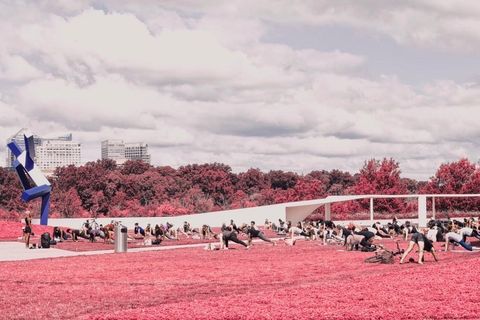 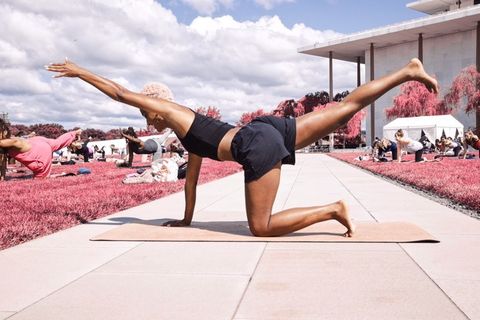 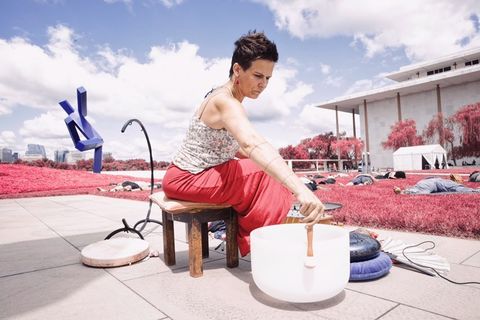 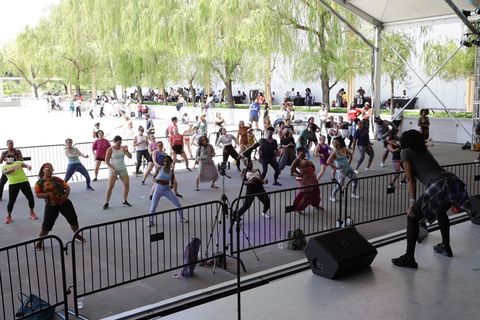 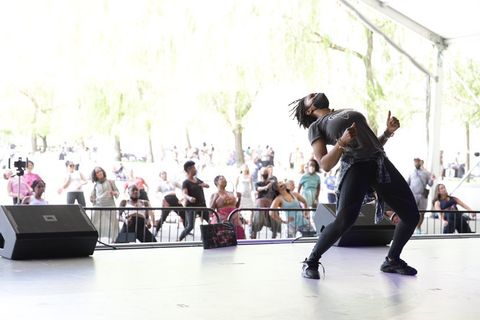 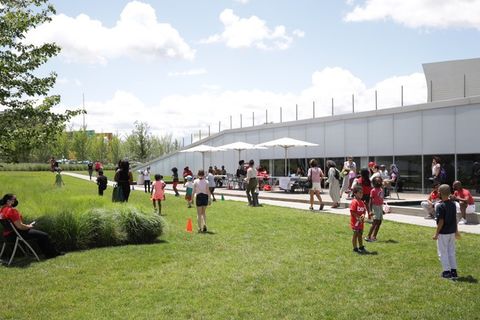 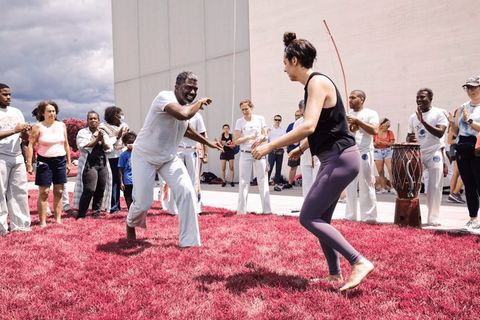 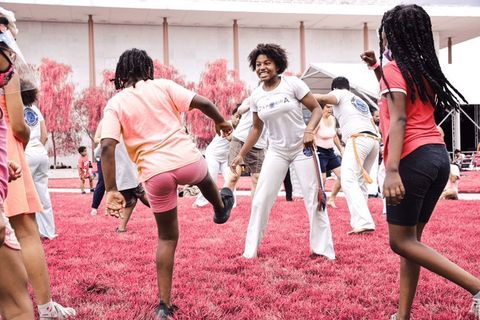 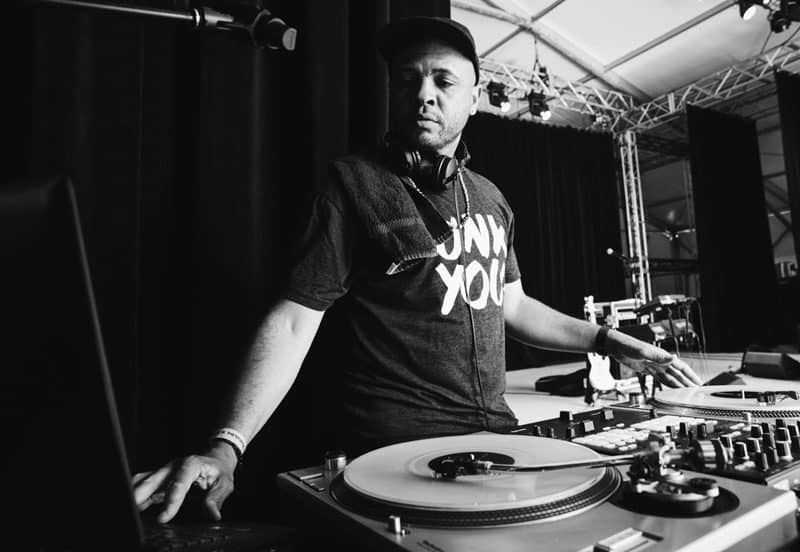 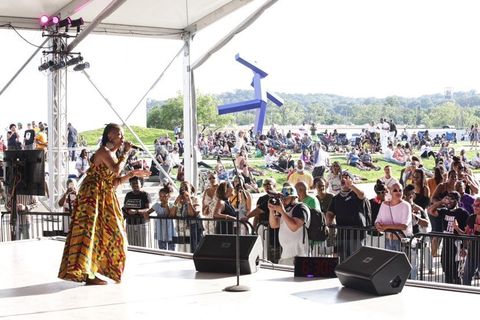 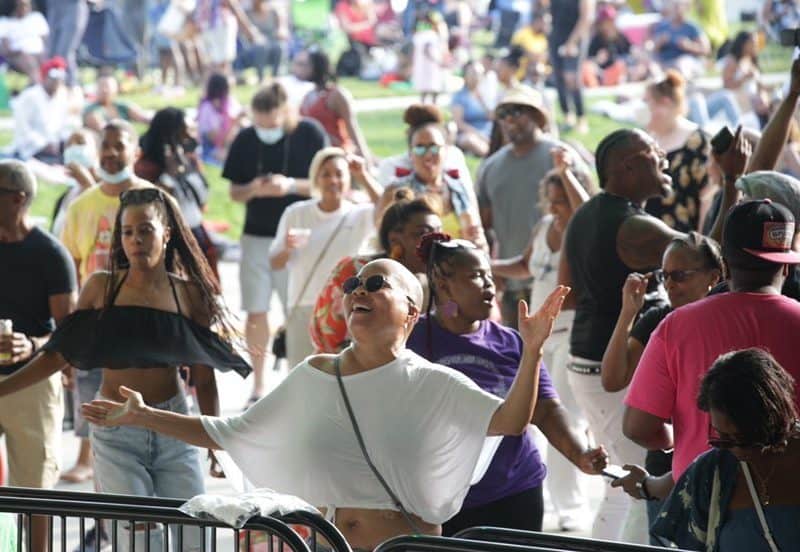 On Saturday, July 3, 2021, LiL SoSo Productions had the opportunity to curate local artists and musicians as a part of the three-day festival Relax | Relate | Release DC. Each day of the festival was curated by three different Black women and sought to celebrate and highlight local Black artists, musicians, poets, filmmakers, and dancers in an engaging and playful way. The festival took place at The Reach Plaza at The Kennedy Center. COVID-19 precautions were in place with mask mandates, pre-registration of vaccination status for those that did not want to wear masks, and an event capacity cap to encourage as much social distancing as possible.

Founder of LSP, Risikat “Kat” Okedeyi, had the opportunity to curate for day three of the festival “Release.” Day three lasted from 10 AM – 9 PM, starting with a yoga session sponsored by Eaton Wellness, and ending with the AxelF afterparty featuring Jahsonic and DJ Stylus. Around 800 people attended the festival, 16 different performances and activities took place throughout the day, and 8 vendors came out to showcase their work.

Reebok’s non-profit initiative, BOKS, came out and created activities for kids to do in the BOKS Kids Sports Activation Area, which at one point had activities going with varying groups of 30 kids. The group also gave out free t-shirts to the kids and the attendees of the festival. Eaton Wellness of Eaton Hotel sponsored both a yoga session to start off our day and a sound healing session to follow up. The morning started off with around 100 attendees present.

Keeping the day rolling, we had a DJ set featuring DJ Divine of Daylight DC, a Discovering The Drum session with the kids on the Victura Deck, and a movement session with Bmore Than Dance, a Baltimore-based dance advocacy group, and another session on Afrobeat dances with Akosua Akoto of ASA Fitness. Temple Hill Skating hosted a clinic featuring Rolloway Productions who came out and taught some of the attendees how to roller dance and showcased some of their own moves with a performance.

Later in the day, DC Retro Jumpers taught people how to double dutch, and even let members of the crowd jump in to showcase their moves. CapoeiraDC did a demonstration, introducing some people to Capoeira, a Brazilian martial art originating in slave times that incorporates dance, acrobatics, and music.

Poet Teri Ellen Cross Davis read some poetry in honor of Prince, using some of his music to accompany her selections. Singer Tamara Wellons offered up a performance art piece title, “Holding Space” on the grassy knoll of The Reach campus. She encouraged her audience to “release” while she sang and then offered flowers as parting gifts to attendees.

The day wrapped up with a performance from Zo! and Tall Black Guy, who performed for the first time ever together on the Millenium Stage. People were reported as driving from as far a Detroit, Pennsylvania, and North Carolina to see their performance. Special guests included Deborah Bond and Muhsinah who each performed with features, “Step Up Front,” and “Hold my Hand”, respectively.

During this event, LSP also had the opportunity to take over the Kennedy Center Instagram to highlight the artists and the day’s activities. In addition, LSP used this as an opportunity to celebrate the three-year anniversary of The Crown Act, and the book My Beautiful Black Hair, by St. Clair Detrick-Jules coming in September of 2021.

The Relax | Relate | Release Festival was focused on Black creativity and Black joy. Risikat “Kat” Okedeyi is a proponent of creating spaces that create opportunities for Black creatives and centers Black cultural themes. Kat kept all of this in mind when curating day three of the festival, so that the event not only gave artists a platform, but created an immersive and fun environment for the community to appreciate, experience, and release all of the tensions from the previous year.

People stayed for the entire event, some of the performers even stayed after their set was over to experience the rest of the festival. The night ended with a rain shower, and a purple sunset, accompanied by Prince playing in the background, and people stayed to keep on dancing! That is the kind of experience that LSP provides and those are the kinds of moments that Kat strives for when she curates.