The DC Hip Hop Theater Festival turns 15 this year and with a new year around the sun comes a new approach to the way the festival is done. This year, the festival has not one, but two curators who will be responsible for making things “pop” from July 6th-July 12th. Goldie Patrick and Baye Harrell are the team behind the upcoming week designed to celebrate hip hop culture, so we sat down with them to get a sense of what to expect. In this Take 5, we hear from Baye . Make sure to  follow the action on Twitter @HHTF and make sure to RSVP for the kick-off party scheduled for Monday, July 6th, 7PM.

LSP: Why did you want to curate the 2015 DC Hip Hop Theatre Festival?

Baye Harrell: In the past, I have been involved with the festival as an actor, playwright, and performer. Being steeped in Hip Hop culture, that traditional “do it yourself” producer mentality has pushed many of us artists into some level of a management mindset. Over the past decade, I’ve been doubling my creative endeavors with more behind-the-scenes activities. This year, I’m completing a Master’s program in Arts Management and Goldie suggested we curate the DC festival ogether. Curation of the festival felt well timed as it called on me to use my skills, relationships, and experience in both the DC hip hop and theater communities to benefit those around me.

LSP: What does hip hop theater entail? Is it different from theater in general?

BH: There are quite a few definitions of Hip Hop Theater floating around. Typically, there is a form which incorporates the use of Hip Hop core aesthetics (breakdancing, emceeing, graffiti, DJing), but I do not feel this is solely necessary to be called Hip Hop Theater. I would say that it should be expanded to include theatrical productions inspired by the Hip Hop cultural experience or told with an authentic Hip Hop cultural sensitivity; it entails stories that speak to the social, political, historical, and spiritual experiences of the Hip Hop community. I do agree with a popular definition that says it must be produced “by, for, and about” the Hip Hop community, but this mainly points toward how it might be best achieved by theaters or theater practitioners. I do think there is something to be said for it also being produced “near” and “owned by” the Hip Hop community.

LSP: How is this year’s festival going to be different from previous years?

BH: I saw an opportunity this year to showcase not only the diverse selection of artists involved in this type of work, but also to highlight the utility of the art form to preserve cultural consciousness. Over the past decade, I’ve looked at my hometown of DC and its rapidly changing landscape. I’ve been sensitive to the concerns of the loss of both physical space and mental recollection of past eras. I’ve reflected on our ability as creative people to participate in preserving awareness and promoting unheard voices. Hip Hop Theater should be a way of keeping our stories alive and I saw this festival as an opportunity to celebrate DC’s identity: who we have been and who we are.

LSP: What are you most excited about?

BH: I’m excited about the bringing former communities together with the current communities in the name of both Hip Hop, theater, and the DC culture. There are some interesting highlights this year, namely the Sound of the Underground showcase which includes new plays based on DC hip-hop and go-go songs.

LSP: Since the theme is Diggin’ DC, who are your favorite DC-based hip hop artists, in any order.

What is Ours? Opening Reception

25sep12:00 pm3:00 pmFeaturedWhat is Ours? Opening ReceptionMeet me in Sandy Spring! 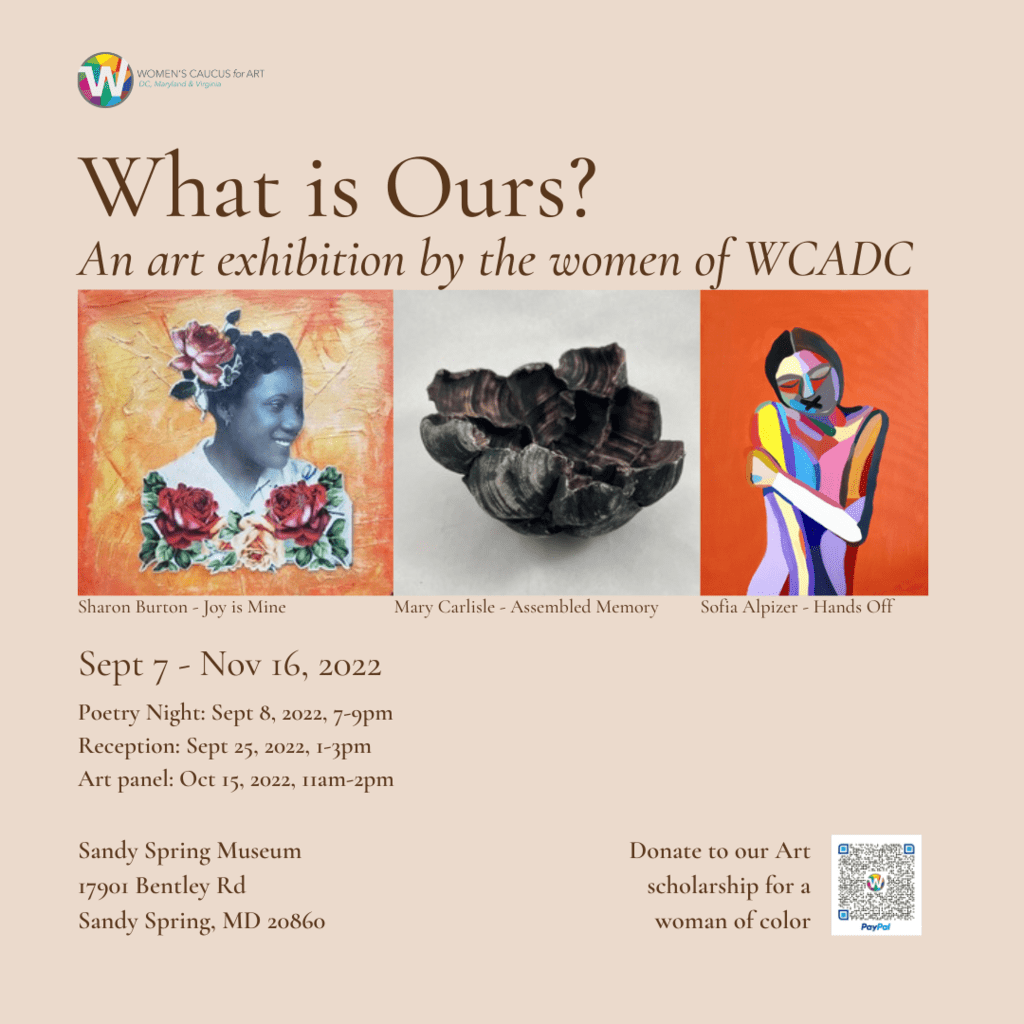 This program is free and open to the public. Registration is encouraged. Meet the artists and enjoy light refreshments at the opening reception of What is Ours?, a juried group

This program is free and open to the public. Registration is encouraged.

Meet the artists and enjoy light refreshments at the opening reception of What is Ours?, a juried group exhibition by members of the Women’s Caucus for Art, Greater DC Chapter, whose mission is to create community through art, education, and social activism.

In a contemporary culture where womxn* artists are profoundly underrepresented in art institutions and women’s rights continue to be repealed, What is Ours? is an opportunity for womxn to reclaim space, authority and confidence in themselves, their communities and our collective future.

Risikat ‘Kat’ Okedeyi is a curator, cultural architect, business owner, professor and connector. Her personal mission is to create and produce high-quality cultural events, digital media, and conversations on and around progressive global Black culture, identities and aesthetics. She has professional affiliations with Prince George’s Community College, Bowie State University, The Kennedy Center, The Reach, Pyramid Atlantic and STABLE Arts.